ChatterRecipe of the Month May 2010 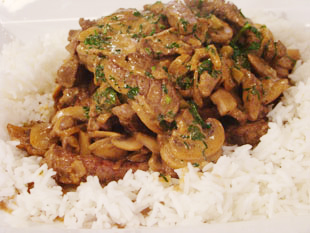 Many years ago I worked as an assistant chef in a French Restaurant, and one of the dishes I learned how to make was an easy and delicious Beef Stroganoff. The owner taught me how to make everything on the menu so he could take the occasional night off to pursue whichever innocent young waitress he was interested in at the time. I learned a lot from this man (not necessarily about infidelity and arrogant vanity) but more about cooking, presentation (which was key) and timing (which was essential). I can remember being petrified of handling a large table order that included several steaks, but all cooked to a different preference. The challenge was have them all ready to go out at the same time, along with any other dishes and vegetables that were still “crunchy”. One steak might be “well-done”, two “medium”, one “medium-rare”, one “rare” and one “blue”, that kind of thing. Anyway, a less challenging dish on the menu was Beef Stroganoff, which was cooked to order fresh – it was that easy to make. It is in fact, a classic Russian dish that has been around since the 18th century, named after a family of wealthy merchants from Novgorod. And seeing as this month is connected to Taurus and the bull, I figured we should have a “beef” recipe.

Melt the Butter with the Vegetable Oil in a heavy skillet and when it starts to “foam” cook the Beef Tenderloin over high heat until browned all over (approx. 5 minutes).

Remove from the pan with a slotted spoon and set to one side. Add the Shallots (or onions) and the Mushrooms to the pan and cook until soft and browned. De-glaze the bottom of the pan with a little Red Wine, add back in the Beef Tenderloin, Salt & Black Pepper to taste and then stir in the Sour Cream. Cook until sauce has thickened, garnish with chopped Parsley and serve immediately with White Rice.