ChatterRecipe of the Month November 2009 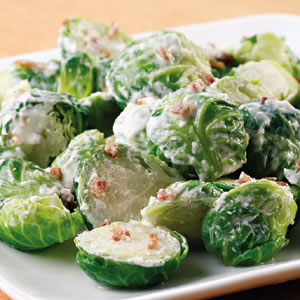 I can hear some of you groaning at the thought of Brussels sprouts, but cooked properly, they are delicious! I found this recipe on the ACE Fitness website and then debuted it last year for Thanksgiving. It dresses them up so they are simply irresistible. So much so, I wished I had made more.

Steam the trimmed and halved Brussels sprouts for about 6 to 8 minutes – do not overcook! They should still be a little crunchy. In a bowl, mix the sour cream, horseradish and chopped bacon together. Add the Brussels sprouts and toss so they are coated with the sauce. Season to taste and that’s it!