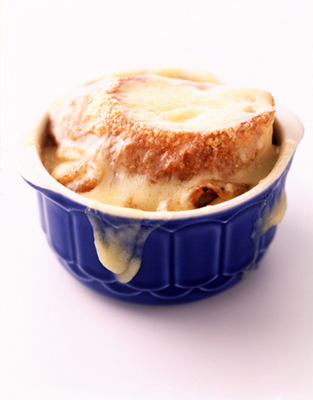 Here’s a classic seasonal soup recipe that is easy and will warm you through nicely on a cold winter’s day. I took this particular version from a favorite old cookery book of mine – Reader’s Digest’s The Cookery Year – in which the recipes are made from ingredients based on whatever is in season each month. This recipe serves 4 people.

Melt the Butter in a large saucepan and add the peeled and thinly sliced Onions. Cover and cook over low heat for about 15 minutes, then remove the cover and cook until they are golden brown, stirring occasionally. Be careful not to over-caramelize them, because if you burn them it will make the soup taste bitter, but you need them browned to give the soup its color. Stir in the Stock and Salt, and add Pepper to taste. Cover again and simmer for about 30 minutes. In a small bowl, mix the Flour with about ¼ cup Water until thoroughly blended. Add this mixture to the soup and stir until it comes back up to the boil. Simmer for a few minutes until the soup has thickened, then remove from heat.

You can finish the soup in a couple of ways. This recipe suggests buttering both sides of the Bread with some Butter, then cover one side with grated Cheese and bake on a baking sheet in a 350 degree oven until crisp. Serve the soup nice and hot in individual bowls and place a slice of the cheesy bread in each bowl. However, when I worked in a French restaurant years ago, we kept it simple by pressing a good handful of the grated cheese on to one side of each slice of bread, then we carefully put one in each soup bowl and placed them under the grill to melt the cheese until golden brown. Fresh bread tends to sink, so this is why it is better to use stale bread! Garnish with a little chopped Parsley.